Yoshitaka Amano's lush ethereal paintings of magical creatures, spirits, goblins, and apparitions have been praised and admired all over the world. In Fairies he turns his considerable talent to capturing in breathtaking images characters from such beloved stories as Shakespeare's A Midsummer Night's Dream, the wizard Merlin and his muse the intoxicating Nimue, mermaids of the deep as well as his interpretation of fairies from Celtic and Japanese mythology.

• Will appeal to the legions of Vampire Hunter D fans worldwide.

• Fans of Amano's work on the multi-million-copy selling Final Fantasy series of video games and Neil Gaiman's Sandman are sure to love Fairies.

• Fairies is part of the Locus recommended reading list for 2007.

Please be aware that this art book has not been optimized for small screen devices. Unlike our comics and graphic novels, it does not include the “panel zoom” feature. However, as always, our app users can utilize the “pinch-to-zoom” feature of the device to enlarge the text and images. 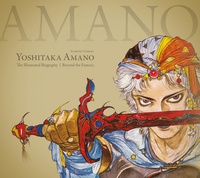 Drawing Down the Moon: The Art of Charles Vess

The Art of Emily the Strange

Volume 3: Bunny in the Moon

The Art of Usagi Yojimbo