This website uses cookies so you can place orders and so that we can provide the most secure and effective website possible. By using digital.darkhorse.com, you accept our use of cookies. Learn more or Continue.
Read Now Checkout Pre-Ordered Manage Pre-Orders Unavailable for purchase in Your credit card on file lists an address in . If this is incorrect, please update your payment information.
Read Now

Hi everyone, and welcome to a sneak peek at the all-new BERGER BOOKS!

As the founding editor of Vertigo, I’m so excited to be back in comics in a big way and couldn’t be happier about setting up shop with the very fine crew at Dark Horse.

Stories that are smart, sensational, and a bit strange have always been my passion — and I’m thrilled to present you with a quick look at our launch titles debuting in early 2018. Come experience weird realities, true fictions, dark secrets, and monsters of a different kind.

I am so lucky to be working with these fantastic and fearless storytellers… and I can’t wait to hear what you think.

In this new, enhanced 10th Anniversary Edition of the acclaimed graphic novel, Zane Pinchback goes undercover as a white man in pre-Civil Rights rural Mississippi, where he thwarts lynch mobs to save his brother, charged with the brutal murder of a white woman. By Mat Johnson (Loving Day, Pym) and Warren Pleece (The Invisibles, Life Sucks).

Cub reporter Zane Pinchback goes “incognegro” for the first time in 1920s Harlem, passing as white to investigate the suspicious death of a black author. A page-turning mystery of racial divide, this series precedes the events of the above graphic novel, beautifully executed by the same creative team.

The unseen side of the notorious exotic dancer and convicted double agent who was executed by a French firing squad in 1917 is explored in this haunting and gripping telling. By Emma Beeby (Judge Dredd) and Ariela Kristantina (Insexts) with color by Pat Masioni.

Girl meets alien meets journalist in this eco-thriller love story where fact-based reporting is gasping its last breath and Mother Nature already has other plans. And what’s with the bees?? By Ann Nocenti (Daredevil, Catwoman) and David Aja (Hawkeye, Immortal Iron Fist).

The Originals: The Essential Edition 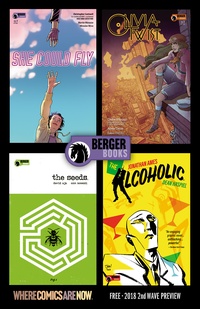 Read Now Checkout Pre-Ordered Manage Pre-Orders Unavailable for purchase in Your credit card on file lists an address in . If this is incorrect, please update your payment information.
Read Now
YOU MIGHT ALSO ENJOY