A quest for the Holy Grail or a murder mystery?

In a Europe where the Catholic Church dominates and sorcery determines political power, master physician Julien Saunière must infiltrate a mysterious cult with a thousand-year-old secret that calls into question the root of all power in Europe, as well as the origins of Christianity itself!

In this volume, the Duke of Lorraine's plans have come to fruition—he's pushed Europe into war, and the French monarchy is in tatters. Lorraine will try to seize the crown by force, but will he survive the coup? Meanwhile, Julien, locked in the dungeon of the Holy Inquisition, faces death and torture.

• "What started as a simple murder mystery quickly grew into perhaps the smartest and most thought-provoking political thriller comics readers currently have available to them."—BrokenFrontier.com

• "Rex Mundi doesn't play it safe, rewarding the reader with a genuine mystery to be solved that has equally high stakes for anyone daring to venture too close."—iComics.com 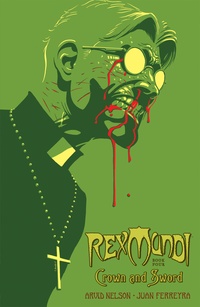