Striking similarities between Lone Wolf and Cub and Kazuo Koike and Goseki Kojima's parallel story line Samurai Executioner (known as Kubikiri Asa in Japan) are evident in the cool attitude, rebellious honor, and unflappable bushido of the lead characters of both series, but readers will delight in the new genre of Edo-era samurai spirit in Samurai Executioner. Wrapped tightly around a core of crime fiction, this is a world of harsh and violent crime, and the forces up against it.

In this volume, after stories of criminals' lives leading to execution, we meet two Edo-era police officers and explore their specialized methods of capturing crafty criminals. In Koike's signature fashion, the volume ends with a psychotic killer and her grueling and violent end. It's a history lesson, art education, and pulp sensation, all wrapped up in one fantastic series.

• Never before published in America, Samurai Executioner is the companion to one of the most seminal works of manga, Lone Wolf and Cub!

• Dark Horse has sold over eight hundred thousand copies of Lone Wolf and Cub since 2000! 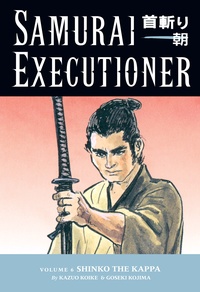